Travel on a hill

In mountainous regions, it is very important to command the right acceleration and brake manipulation to save considerable fuel.

Uphill: The target is to travel in the highest possible gear with almost full pressure on the accelerator pedal. It is frequently argued that this level of pressure with low revolutions is too much. Car manufactures build the car in a way that you can travel constantly at 1,000 rpm at full load.

Switch off the engine at short stops

Switch off the engine at short stops. For example at a railway crossing, at a traffic light, or while waiting for someone. When switching on the engine again, do not press the accelerator.

The fuel consumption of a modern engine during idling is about 0.5 litres per hour, depending on engine type. Therefore switching off the engine in appropriate situations can soon lead to interesting fuel savings. When you expect to be halted for more than 20 seconds it already makes sense to switch off the engine.

When switching on a modern fuel injected engine (generally manufactured from 1990 onwards), you should not press the accelerator pedal. The electronic engine management system takes care of a correct start. Pressing the accelerator only ‘confuses’ the system, which makes starting harder and increases fuel consumption and exhaust emissions.

In older petrol cars with a carburettor (generally manufactured before 1990), you often have to press the accelerator a little for switching on the engine. This consumes an additional amount of fuel. In case of carburettor cars it therefore only makes sense to switch off the engine when you expect to be halted for more than one minute.

The correct method to drive around curves is influenced by several aspects including the speed of approach, the weather, the nature of the curve and the condition of the road. The speed approaching the curve should be reduced by manipulating the brake rather than through changing to a lower gear.

In general, it can be said that with an anticipatory driving style a good estimation of the situation is possible. Thus, the vehicle can be manipulated to approach the curve with the correct speed, possibly without needing to use the brakes. Therefore, the highest possible gear should again be used for manipulating the curve. Using full acceleration with short, sharp pressure on the brakes, and then high revolutions to speed up again round a curve is not only bad in terms of fuel consumption but also for the driver. When manoeuvring the vehicle in relation to the road, heavy use of the brakes causes a distinct transfer of weight on the axes, which can very easily result in malfunction and so frequently leads to an accident.

Of the factors influencing fuel consumption, weight of the vehicle is the most important. Thus, with a load of 100kg on a medium-class vehicle of 1,500kg weight, there is an increase in consumption of about 6.7%. With one full tank being 3.5 litres, in one year this adds up to an increased expenditure of 100 EURO.

The second very important factor influencing fuel consumption is aerodynamics. All vehicles are put through thorough testing in wind tunnels to optimise their aerodynamic quality. Additional parts to the basic vehicle which clearly impede the aerodynamic quality include such things as roofboxes and extra aerials. On the diagram below, it can be seen that the required performance in terms of speed depends on the air resistance.

A ski-carrier can greatly increase the c-value (measure for aerodynamics) so that the consumption is noticeably increased, especially at a high speed. At a speed of 120km/h, it can cause at least a 20% increase in the amount of fuel consumption (about 200 EURO per year). A journey should never be made with a ski-carrier or general roof box if they are not really needed. Other inappropriate parts can also badly affect the aerodynamics of a vehicle, such as large aerials. Another important point concerns open windows, which cause additional currents and so reduce aerodynamic quality. 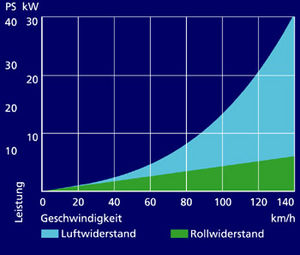 Check the tyre pressure of your car once a month

To ensure correct tyre pressure, you need to check your car’s tyres at least once a month. Tyre pressure must be checked at cold tyres. This means that you have driven less than three kilometres, otherwise you have to wait for about 10 minutes to let the tyres cool down. Car manufacturers always recommend two different tyre pressures: one for driving unloaded and/or mainly at normal speeds and one for driving fully loaded and/or mainly at high speeds. These pressure indications can be found in the instruction manual, but often also on a label at the door post or at the fuel filling flap of your car.

Nowadays newly sold passenger cars of several makes are already equipped with an electronic system that continually monitors the tyre pressure. Such systems can also be fitted in as an accessory in other cars. 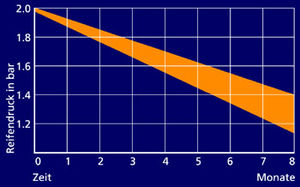 It is recommended to use air-conditioning only when it is needed and not to cool down to less than 23 degrees.

In times when it is necessary to cool the inside of a car from temperatures above 25°, especially when stationary in traffic, it has been calculated that consumption will rise by 20%. However, out of town at speeds of over 80 km/h, use of air conditioning results in less fuel being needed than an open window (due to the formation of whirl winds). A car which would normally consume 11 litres of fuel would use 13.3 litres with air conditioning.

Make use of in-car devices

Make use of in-car devices, if present, like rev counter, cruise control and on-board computer. Modern cars are often equipped with devices that support efficient, safe and comfortable driving.
Rev counter
A rev(olution) counter prohibits the vehicle from being driven at excessive, and therefore very inefficient, engine speeds.

Cruise control makes it easy for you to maintain a steady speed and to avoid fines for unperceived speeding. This saves fuel and exhaust emissions and moreover, contributes to a relaxed driving style.

Econometers and shift indicators can be found in some, mostly older cars of the seventies and early eighties. But they reappear in some newly sold cars, however a little more sophisticated for making use of data of the engine management system.

Speed limiters and/or RPM limiters help avoiding unperceived speeding and excessive engine speeds. The parameters for speed and rev limitations can be determined by legislation, fleet owners or car manufacturers and programmed into the device. In generally these limitations can not be overruled by the driver. The use of speed limiters is quite common for trucks and delivery vans. Fleet owners often choose to fit in speed and rev limiters in vehicles of current fleet to reduce fuel consumption, accidents and speeding fines and also to boost their corporate image.

All devices mentioned save about 5% fuel. Combined with driving style training the benefits are significantly higher.